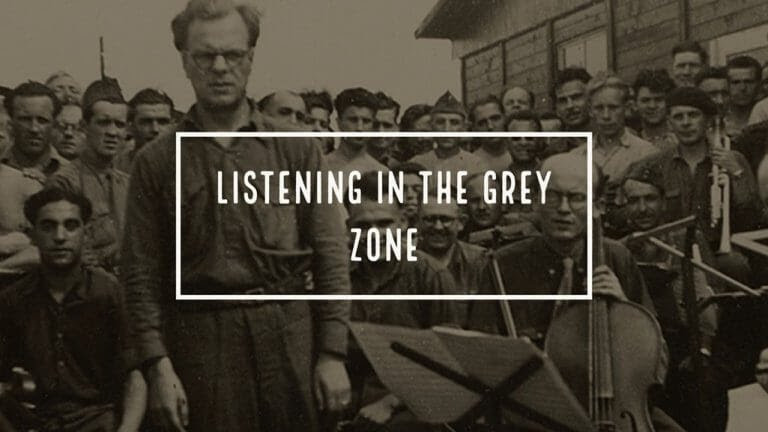 Music Amidst Violence: A Discussion Forum Centre for Ethics, University of Toronto, December 7, 2017.

Music enriches life so immeasurably that we are inclined to think of it as a purely positive phenomenon.  But it is more complicated than that.  Music is a product of a particular time and place and the context in which it is created can be dark, violent, exploitative, and even demonic.  To think seriously about music it is necessary to reckon with the problematic role it can play in culture.

The long dark shadow of the 20th-Century’s mass extermination and oppression that still hovers over us,  and remains a subject of urgent inquiry for scholars and thinkers. It includes a musical legacy of compositions that emerged from sites of horror and massacre, along with Nazis concentration camps and Soviet gulags. Some are now being uncovered after suppression or retrieved from hiding places, and some have been performed as memorial tributes for decades.

They all present a paradoxical dilemma for their performers and their audiences. Given the grim context from which they emerge, and the suffering and trauma they express, can they be performed as a mode of entertainment?  If so, how may this be done sensitively and respectfully so that they do not spark adverse reactions in the survivors of the traumas that are being memorialized in these compositions?  Can we really take pleasure from music that is born from suffering?

These were some of the questions posed by a gathering of approximately 35 music scholars, performers and music lovers who met around a seminar table at the Centre for Ethics at the University of Toronto on Thursday. Co-hosted by the Faculty of Music, the Jackman Humanities Institute, and the Anne Tanenbaum Centre for Jewish Studies, the event was created, in part, to start a dialogue between groups who take music equally seriously but approach it from different scholarly backgrounds.

This made for an especially rich exchange that was enhanced even further by the presence of two outstanding performers:  Polish cellist Dobrochna Zubek and singer-songwriter Adi Braun. The conveners of Music Amidst Violence: A Discussion Forum, wanted participants to experience a performance of such problematic work, to make the discussion more than theoretical.  This made the forum especially thought-provoking and more personally challenging as well as a privilege to attend, as music that has almost never been heard was presented.

Polish cellist Dobrochna Zubek opened the proceedings with her first public performance of a solo piece by Mieczyslaw  Weinberg, (1919-1996) a Jewish composer of 22 symphonies and over 20 preludes for cello, who lived under surveillance in Soviet Russia, while his works were largely ignored.  Listening to it in an intimate space instead of a concert hall felt like a historic moment, powerfully demonstrating how the context and backstory of a musical performance can have a transformative impact on the experience.

The theme of adding a back story of tragedy to a piece of music and its effect on the music’s reception was returned to many times.  Musicologist Michael Beckerman described his experiments with accomplished musicians, in which he provided them with an anonymous score without telling them anything about it, and then tracking how their performance changed once he told them that the composer had been in a concentration camp, or that the composer had died.  While the performers claimed that the narrative deeply influenced their subsequent interpretation of the work, the recordings made by Beckerman proved otherwise.  “Sometimes,” he told us, “the musicians played exactly the same way but made different faces.”

The influence of the tragic history of these compositions on their performance pertains equally to the critical reception of the work.  “Music that came out of suffering becomes valorized,” said Beckerman, “ so that we tend to overlook some of the disturbing facts, such as that the composer was granted privileges that allowed him to survive, including being exempt from labour.”  A starker way of putting it is that some music may have come to us at the cost of the death of a fellow prisoner who didn’t happen to compose.  When we know this, can we comfortably continue to listen to such works?

These are the questions that have to be asked about the music that comes from darkness.  The struggle to come to terms with them continues so long as they are performed.  This was most eloquently expressed by Adi Braun in her description of the very personal challenge she confronts when she sings  Cabaret songs from the Weimar period.  Braun, who is a great interpreter of this sultry, seductive repertoire, and has just released a CD of Weimar music, Moderne Frau) explained her attraction to this music,  due to its “high sociopolitical content, its decadence, and the courage and daring of the songs that criticized the government and its growing anti-Semitism.”

Braun played an example of one of these subversive pieces; “An allem sind die Juden schuld” (Everything’s the Fault of the Jews), a song set to Bizet’s Haberna attributing every conceivable malady to the Jews, which had been written and performed by a Jewish singer with brilliant irony.  Many of the Weimar Cabaret performers and composers were Jewish, and Braun feels that as a German, it is a meaningful gesture for her to bring these works back to life.  But she is well aware that some will be offended by this gesture.  She has had polar opposite reactions from Jewish audience members and students in the course she teaches at the Miles Nadal Jewish Community Centre, some refusing to tolerate German lyrics, others pleased to hear them. Her dilemma, which remains unresolved, was most poignant for her in the lyrics she wrote for her own composition,  “Gestern,” (Yesterday) which included the phrase  “…Es ist die Wahreit die frei .macht, es ist die Liebe?”  (is it the truth that sets us free/is it love?)

“Originally I used the word ’Arbeit ‘“ she explained,  an intentionally disturbing reference to the horrific slogan over the gateway to Auschwitz.  “But I was told in no uncertain terms by a German journalist who listened to the demo cd, not to use that.”  Out of respect, she replaced the phrase with less charged words, which, eliminated the reference to the injustice she wanted to acknowledge in this song.

“Gestern”, which Braun played for us at the forum, remains a beautiful lamentation about the forbidden love between a Jewish and Aryan woman.  Knowing that she recalls the compromised lyrics every time she hears or sings this song, enhances my awareness of how complex the artistic challenge is for Braun and how seriously she takes it.

It’s a conflict that remains unresolved, and is certainly not confined to the history of Europe.  Other presenters spoke of music complexities in zones of conflict including South Africa after Apartheid, in Sarajevo, Rwanda and Korea.  How to react to the music of suffering remains an “intractable problem” according to Michael Beckerman.  When we listen to it, we are listening in “the gray zone,” he said, taking a phrase from Primo Levi, who used it to describe the experience of survival in Auschwitz.  Unresolved as it may be, it is important that we be aware of it, and forums such as Music Amidst Violence bring the gray zone to our attention.